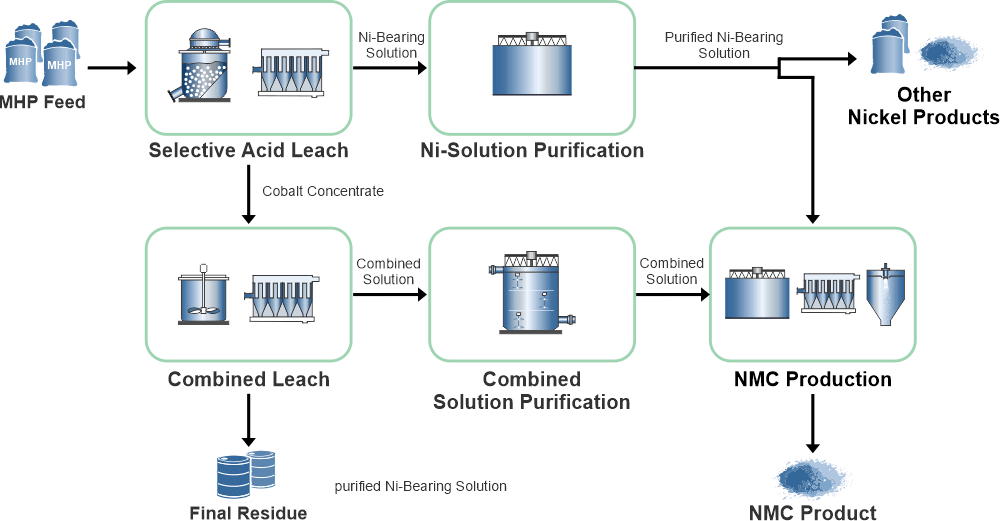 In July 2021 Pure Battery Tech(PBT) and Poseidon Nickel (ASX:POS) signed a Memorandum of Understanding under which the parties will explore avenues to work together including Poseidon potentially becoming the primary supplier of feedstock to the proposed refinery initially from their Black Swan mining and processing operations, currently on care and maintenance.

The WA pCAM Hub will be an integrated NMC battery material refinery. It will refine both Nickel concentrate and MHP. This Hub will be a huge enabler for the marginal nickel providers to take their product to market increasing nickel production for WA.

Construction on the refinery is due to begin in Q2 FY23 (subject to feasibility and other commercial arrangements).

The Project will focus on collaborative production of CAM material, assisting in developing the ecosystem for advanced EV battery materials production in Australia.

An estimated 1,190 direct and indirect jobs will be created for the Kalgoorlie region from the refinery.

Poseidon Nickel (ASX:POS), is a Western Australian (WA) based Ni sulphide developer with +400,000 tonnes of nickel resources across three projects in the Goldfields region. All projects had operating mines and processing plants in the past which are all now on care and maintenance. Poseidon is currently completing a bankable feasibility study on the restart of the Black Swan project to produce nickel concentrate which could be a primary feed source for the proposed WA PCAM Hub.

PBT’s current business scope is to deliver these critical materials as an NMC Cathode Active Material (pCAM) in the most environmentally friendly and cost-effective method; the objective is to contribute to work with Poseidon Nickel towards the collaborative and sustainable expansion of the LIB and Electric Vehicle (EV) industries via the WA pCAM Hub (the Project).

Production is targeted at the Asian (Korean and Japanese) and European (German and French) LIB industries, including Automotive OEMs and battery cell makers.  Marketing and off-take will be managed jointly with other stakeholders.

The technologies being utilised within this Project are industry-leading worldwide in emissions and cost for the production of pCAM materials. The pCAM Hub will focus on expanding to higher value add products like CAM.

The economic impacts of our planned WA pCAM Hub were analysed by Ernst & Young with a sophisticated Computable General Equilibrium (CGE) model. From 2022 – 2031.

In NPV terms, the Project is anticipated to contribute an additional $4,023 million in Gross Regional Product in the Kalgoorlie LGA, an increase of $2,612 million in household consumption, and an average increase in employment in the region of 1,193 FTE employees over the period.

These contributions increase when considered for Western Australia as a whole, with an increase in gross State Product of $4,174 million, an increase of $3,233 million in household consumption, and an average increase in economy-wide employment of 1,729 FTEs over the modelling horizon.

The WA pCAM Hub concept provides the opportunities to further improve reduction of carbon emissions by connecting and scaling upstream and midstream activities before exporting.

We are focused on a collaborative business model with miners (e.g licensing PBT technology, material-leasing, tying license fees to the price of carbon emissions).

The starting preposition of the hub is to cater to mine based suppliers in WA with a strong signal to increase capacity and capability. This not only makes the project commercially more viable, but also strongly motivates miners to produce more nickel and financiers to invest.

To find out more about our current supply opportunities. >> Download here.
Check back here for regular updates.